Here’s How to Build a Better Brain 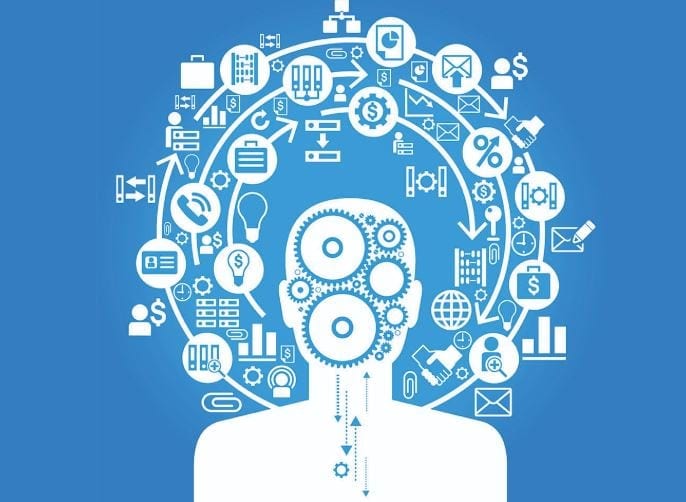 All innovation has – at its root – creative thinking and collaboration. There are mental attitudes that foster creativity and those that inhibit it. Unfortunately, unless we are careful, there are factors at play in our global culture that will stop creative collaboration dead in its tracks. Here are 3 big ones and what you can do about them.

Optimism. We’re all supposed to have it. Yet it’s extremely challenging to be optimistic in our time of constant negative news flow. And it’s nearly impossible to think creatively and work tenaciously to produce an innovative outcome when one is pessimistic!

Remember that the primary business model for “free” media – in all of its forms – is to get eyes & ears attending to that media so that advertising can make it into our awareness. Our brains are structured such that they attend to “bad” news more readily than good news. So a general read of almost any media will create a false view of the bad/good event ratio. In this environment, to prevent pessimistic devolution, we need to take proactive care to determine what is fed to our brain.

Whether it’s the internet via our social media feed, or the news via TV, radio or print, our “danger vigilant neurology” is well understood and manipulated so that we’ll tune in.

Think about the structure of the headline for this article. We wrote it to intentionally hook that part of the human brain which is vigilant for potential danger. If we had written something like “The 3 Principles That Drive Success” multiple data sources tell us there would have been far fewer people clicking into (and getting value from) this article.

Not only does our mind want to know of any potential danger, it has a hard wired tendency to ruminate on danger more than it does for ruminating on stories of the good that surrounds us. We must inoculate ourselves against pessimism. In this world where passivity about media feed will skew that feed more to the negative than positive, we must take an active role in finding feed that counterbalances. Get your shot. Lack of this inoculation has been shown to cause idiocy.

The three most powerful inoculation methods we know will follow shortly.

Here’s something every Psychology 101 student learns, at least intellectually: Once you and I form a view of something, we will discount evidence that challenges that view, and over-value evidence that supports it. It’s called “confirmation bias.” The creativity field likes to call it “stuck thinking.” For example, the U.S. has the most polarized political climate of my lifetime, stuck in this pattern because of confirmation bias.

Those on the two extremes of the liberal-conservative continuum continuously listen – almost exclusively – to media feed that confirms their view. They intensify that perspective in a stream of political complaining with similarly biased friends. These meetings of the “ain’t it awful club” confirm that their view is correct, further potentiating the neural pathways that feel “recognition and reward” whenever additional evidence aligned with this view floats by. Their ear-gates and eye-gates are quite welcoming of the world-view-confirming data, yet act as powerful filters to keep challenging viewpoints out. Create secret agents to bring you data from outside your fortress. 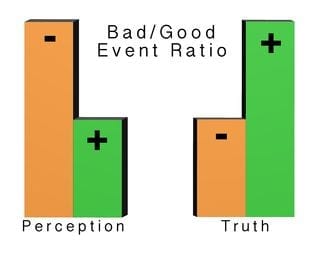 Since 1989, there has been an upsurge in international efforts to ensure a more secure world. And data shows it’s working, despite what we hear and see on the news. To highlight the Human Security Report 2013 (a meta-analysis of recent studies promoting the thesis of decreased violence, along with studies which attack that thesis) data indicates that human violence of all kinds is decreasing in significant ways. “These include slavery, torture, cruel and inhumane punishments, and the physical abuse of children and the mentally ill. Most of these practices have been eliminated, proscribed, or greatly reduced in recent centuries.” A TED talk overviewing the data can be viewed here.

There is little social pressure to do anything to counteract the pessimistic, “we vs. they” world view that we are being exposed to. In fact, the advent of social media as a “news” source has allowed for the creation of customized news using complex algorithms that determine your engagement with particular news tidbits. In an attempt to keep bringing you back to your social media feed, Facebook, LinkedIn and the like engage in (here’s some jargon for you) “Passive Feed Affinity Mapping.” When the cunningly constructed algorithm finds what you like – what you visually loiter on – it serves up more of the same. Further feeding any bias that took you down a belief pathway in the first place. Challenging viewpoints? Not so much. Unless we become cognitive activists, assertive about challenging our own view, dedicated to managing our information-feed such that it is varied and balances the negative cacophony, we will succumb to some form of polarized pessimism.

If we allow that to happen, we place all of our futures in great jeopardy. Pessimism is rarely the platform for future success. Even a “doomsday prepper” must be optimistic about their own ability to survive, or they would never have the energy for preparation. They’re just optimists with a hobby of scenario planning. Become a cognitive activist.

3 Inoculation Methods for the Cognitive Activist:

First, recognize that it is almost impossible to be unaffected by this negative noise. You will have to work to get your brain out of the box. And work to keep it there.

I’m sure you can find people who are more its victim than you are, but be careful: Don’t use “at least I’m not as bad as….” in a way that excuses you from becoming an activist in your own mind-feed. We call it or having humility.

Second, assess your current feed and find two counterbalancing information sources: One for different world views than your own, and another for steady, factually correct and positive stores about what is happening in the world. As an American, for a different world view, I find fascinating inconsistencies in the way news is delivered via various networks. It’s fun. I listen to RT, Al-Jazeera, Fox, MSNBC, CNN and NPR.

I can’t know what your worldview counterbalance needs to be, but generally it might be what you describe as “what those other idiots read/listen to.”

Example: There was a time when I was asked to consider running for office at the State level. While I was clear in my “no thanks” I was asked to monitor a private list-serve conversation where strategy was discussed by the various political activists in my region. In the particular election of that time, this party did very poorly. There were a lot of posts in the running commentary of that list-serve shaped like this: “I can’t believe people were so stupid as to vote for (insert opponent)!”  I weighed in with a challenge: There would be little likelihood of this group creating smart messages from the mental position that people who disagreed with them were stupid. Instead, these activists needed to immerse themselves in the worldview they were challenging. Their opponents were not stupid, they just had a different world view. I knew what radio stations the list-serve members likely listened to on their long drives to our state capitol, so I challenged them to listen to those with a different viewpoint, and gave them the frequencies for those stations. To their credit, they did so, and with more effective messaging, easily won back the seats they lost in the next election cycle. And then some!

Third, check out some of the positive feeds that you can pull into your social media. I like www.dailygood.org; I get an informative and positive e-mail from them every morning, and an inspirational video on Fridays. I’ve been blessed to build a network of friends that share good stuff, as well as “negative perspective challenging” information. At the time of this article, I just received “26 Charts & Maps that Prove the World is Getting Better” via a Berlin based friend in my Facebook feed. It’s heartening to see that it’s already been shared 32,000 times on Facebook in the 8 days since originally being published. 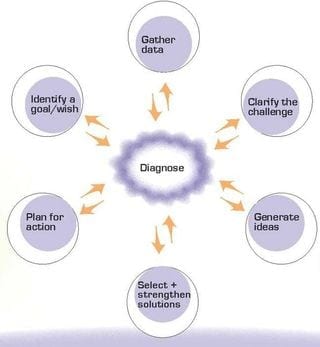 Finally, connect this all to Creative Problem Solving as a core life skill. But not just the toolsets and skillsets of CPS. Keep learning the mindset. What we call it Innovation for Results. I bet you see the same thing I do. If I am optimistic, if I believe that good will come, I enter any “problem solving” session with the optimism that fuels my innovative brain, rather than the pessimism that sucks the energy out of my entire being. I choose optimism. What about you?