Want to Be an Innovation Leader? You’ll Need Tenacity

In this, the fourth article of a series in which we detail the five key values for leaders of innovation, we focus on tenacity. And yes, it’s taken a bit of tenacity on our part to get this (and every) newsletter written and published. The set of five key values that we overviewed in the beginning of this series fits into the overlap between Leadership and Innovation. These are the key values necessary for being a leader of innovation, regardless of your place in the organizational hierarchy. And perhaps none is more important than tenacity if you’re not at the top of the org chart.

Bringing innovation to life from wherever you are in the organization requires five key values:

Let’s face it, innovation rarely occurs without significant levels of tenacity on the part of the innovator, the innovation team and/or the innovation leader. Invariably, “newness” is accompanied by two key attributes: 1) innovation is typically difficult to understand at first (because by definition, it has never before been seen), and 2) innovation is sometimes perceived as a threat (consciously or unconsciously) to the known, comfortable status quo in the organization.

We’ve covered the “why” of these innovation-inhibiting behaviors elsewhere in our newsletters. Here, we will explore how tenacity plays its part in bringing innovation from future potential to historic reality.

The way of innovation requires exploring dead-end pathways, overcoming unforeseen obstacles, and following early intuitive beliefs. Because it requires steady curiosity, commitment to the long haul, and courage to stand alone in a field of doubt, we rarely see innovation come into existence without high levels of tenacity on the part of those involved.

“Let me tell you the secret that has led me to my goal. My strength lies solely in my tenacity.”

Tenacity is that “stick with it” quality when things get difficult; the mature patience and steadiness that is required to convince other people – one by one by one – of the wisdom of an idea. It means trying over and over and over again until you reach a critical mass – the tipping point – of the right people understanding why it’s worth it to go through the painful process of change. One senior VP at Kraft said, “Empowerment is not being allowed to do whatever you want, that’s anarchy. Empowerment is knowing that you have the permission and obligation to propose an idea as many times as it takes until your manager sees the value in it.”  Don’t let one “no” stop you.  Don’t let 100 “no’s” stop you.  Don’t let 1000 “no’s” stop you. (We’ll talk about the difference between tenacity and stubbornness in a bit.)

How do we develop tenacity?

There are some things we can do to increase the likelihood that you will have access to tenacity as a reservoir of energy when you need it. 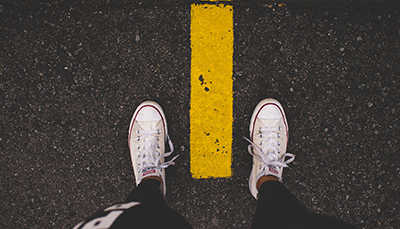 The way we’re wired up is that we tend to move away from pain and toward pleasure. When you study the people who seem to have the greatest tenacity, even in the face of very difficult present-moment circumstances, you’ll find that they’ve constructed a story…an internal narrative…that motivates them to carry on even in the face of difficulty.

Example: In the early 1990’s, General Motors Executives told workers in a Delaware GM plant that it would be closed in 1996 and that there was nothing that could be done. Instead of polishing his resume, the plant manager, Ralph Harding, immediately created a new story. In his follow-on speech to the stunned workers, who had already heard the “pain story” he created a compelling “pleasure story” built around the idea of showing GM Execs just how stupid they were. A “be the best” initiative was launched, with the primary emotional motivation of embarrassing the Execs. There were posters, there were weekly updates to everyone on quality and cost improvements, and there was deep engagement from the union. Within 2 years, the plant was the lowest cost, highest quality operation system wide. The decision was reversed, and the plant stayed open.

Surrounding yourself with other “tenacinators”

Most of us are not able to sustain absolute commitment all of the time. We have self-doubt. We get tired and discouraged. Having a group of equally committed partners on your way to the future allows for the role of cheerleader to naturally shift around in the team. When you’re down, someone else is in a whip-cracking mood, and vice-versa.

Example: One of our Partners was the facilitator and member of a global team chartered to create an innovative new process for clinical research at a midsized pharmaceutical company. There were incredible political hurdles, and it often seemed as if the team was set up to fail. As awareness grew of the political game being played in the organization, and with the realization that the tea

m’s report was a pawn in that game, pessimism was their constant enemy. Different team members at different times energized the group with the rally cry of “Let’s be great at this – let’s create a proposal so high quality that any ‘No’ is obviously politically motivated, and cannot come back to burn us!”  In the end, some key elements of the proposal were not accepted, and in the minds of the team, the opportunity for systems improvement was compromised significantly. However, the team reports radical success in creating a way of working together. They now tell us that they are more effective at finding ways to move good things forward because they build teams with “tenacinators” on board.

Drawing new thinking into the flow via wide reading and diversity of backgrounds.

Often, the “insurmountable obstacle” that shows up on the road to innovation has a way around it that only certain people can see. This is one of those places where diversity of background, experience and temperament can really pay off. This is a place where havinga mixed team in terms of its problem solving preference can yield better and more steady results.

Example: We worked with a marketing organization where each product had a single person responsible for designing and implementing the marketing strategy throughout that country for that product. We were asked to help them because too many of their marketing efforts were failing. When we looked at the entire set of FourSight profiles for the product managers, a glaring issue was evident. We had a group of people who preferred to spend half of their time generating lots of ideas (“Ideators” in FourSight speak) and the other half putting the idea into action (“Implementors”).  Unfortunately, there was little energy spent clarifying the consumer need and developing a well-refined plan for implementation. Once the team saw what they were doing wrong, they fixed it by building a system where diversity of thought is created by reviewing each marketing strategy with their peers to strengthen it, using the Praise First: POINt process, prior to roll-out. Even though it wasn’t their preference to spend time reviewing each idea to make it stronger, they realized that they needed to be tenacious and do the necessary work to make the marketing strategies excellent.  As a result of their tenacity, they’re doing much better now.

So being stubborn is a good thing?

There is a difference between tenacity and stubbornness that bears exploration. Stubbornness is tenacity without humility. So once again, that base value of humility appears to be critical. We all have experienced the stubborn person, and know from direct experience that stubbornness gradually causes a person, no matter their brilliance, to be marginalized by the group and therefore to become less effective in bringing forth innovation. Because it is a challenge to maintain humility, it is wise to regularly ask (when experiencing resistance to your idea) “Am I being stubborn here, or tenacious?”  This is where the value of “curiosity” fits in, seeking to really understand the answer to the question “What concern does this person have that I’m not adequately addressing with my idea or proposal?”

In the world of the Gator-Brain, all innovation — newness — requires tenacity. Build the system around you that increases the likelihood that it will show up when the going gets tough.  Growth requires it.  Innovation requires it.  The way of the innovation leader is paved with it.